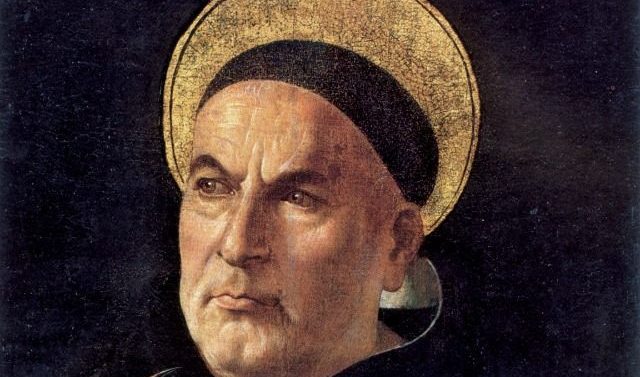 Thomas Aquinas Against Your Digital-Age Anxiety

Arecent study found that “more Americans [are] suffering from stress, anxiety, and depression” than ever recorded. An article in Psychology Today described this increased anxiety as contributing to the fact that “between 1999 and 2014, the suicide rate increased [by] 24 percent.” Nistsu Abebe attempted to diagnose “America’s New ‘Anxiety’ Disorder” in a recent article for the New York Times Magazine. The usual suspects have been rounded up: We are anxious thanks to “social media,” thanks to “Trump,” thanks to the lingering effects of the “Great Recession,” and so on.

But before we gulp down another round of meds and launch into hazy rants lambasting Trump for our digital-age jitters, we ought to be clear on what, exactly, anxiety is. This is the vocation of philosophy in the modern age — to plod behind popular discourse and puzzle over the terms it casts away like so many cigarette ends on a beach.

Anxiety is a kind of fear. The medieval theologian Thomas Aquinas describes fear in his great textbook, the Summa Theologiae: Fear is a “passion of the soul” characterized by a bodily “contraction” that occurs whenever one “regards a future evil which surpasses the power of him that fears, so that it is irresistible.” Let’s break Aquinas’ definition into its parts.

Fear is an emotion; a feeling; it belongs to that class of experiences that arise in response to our perception of this or that reality as significant, allowing it to pierce and trouble our psychological and bodily experience.

2. Characterized by a contraction.

Fear is a characterized by the bodily experience of “shrinking inwards.” One’s extremities grow cold, we tremble, pull back from danger, and so forth. Aquinas describes this in fantastically medieval fashion: “[W]e see the inhabitants of a city, when seized with fear, leave the outskirts, and, as far as possible, make for the inner quarters. It is in resemblance to this contraction…that in fear a similar contraction of heat and vital spirits towards the inner parts takes place in regard to the body.”

The object of fear (or the specific significance of the reality that causes fear) is always an evil — the destruction of some good we hold dear. Aquinas takes pains to indicate that the object of fear is always imaginary. We do not fear the lack of our leg after a bear has bitten it off. We sorrow over it. But if we imagine that this or that bear will bite off our favorite leg, then we have fear — fear of the future loss of our leg. Fear is a future-facing emotion, a shrinking away from the imagined destruction of good things.

Resistible evils are not met with fear. If I know I can avoid failing an exam, I do not fear it, even though I may recognize it as a possible future evil. The sneaking suspicion that I am unprepared, unable to resist, doomed and damned to be squished under the oncoming Finals’ Week Express — this gives rise to fear.

Fear comes in many kinds. Laziness is a kind of fear — a shrinking away from the future evil of labor. This fear became fashion a few decades ago, when our antiheroes were characterized by laconic lethargy, a slow-moving “cool” that avoided the work of the “stiffs” and the “suits” — like Cool Hand Luke. Today our fictional heroes are more likely to be anxious — manic loners and twitching nerds, like the BBC’s Sherlock. Shame is another kind of fear — a felt contraction that occurs upon the threat of disgrace. This fear was respectable in Aquinas’ age — he called shame a quasi-virtue, held by those with a great sense of honor. Anxiety is our fear of choice, a mark of success in the digital age. As a New York article put it: “Panicked strivers have replaced sullen slackers as the caricatures of the moment, and Xanax has eclipsed Prozac as the emblem of the national mood.”

The editors of Wired recently took up the problem of our increased anxiety, rooted it in our transition to a digital age, and attempted to assuage us, arguing, “It’s natural to worry. But it isn’t helpful.” They set about restoring our peace by offering sane evaluations of the threats posed by cyberattacks, mechanized labor, identity theft, and so on. But anxiety, as Aquinas argues, is fear of the “unforeseen evil” — the irresistible possibility of disaster lurking on the horizon.

Unlike the straightforward fear of cyberattacks or charging bears, anxiety is usually puzzled by its own existence; the object of fear remains unforeseen. The anxious man is ill at ease; sick with the feeling that something — he knows not what — is about to go wrong. We should phrase the question in accordance with Aquinas’ description: What about the digital age makes man into an antenna nervously detecting obscure future evils on the horizon?

The digital age is one in which useful skills and property are gathered into the hands of the few and rented out to the many. We make our monthly payments with a potent combination of currencies: money, attention span, personal information, and an increasing inability to do without these selfsame digital conveniences.

Increased rent always increases the possibility of unforeseen evils, because rent removes problems and solutions from our hands and places them in the hands of others. Most people do not own the skill of automobile repair — we rent it from someone who does. This eliminates a myriad of foreseen evils — having to do the work, buy the tools, build the garage, and so forth. It also increases the threat of unforeseen evils — like breaking down in the middle of a journey across Texas without a clue as to what’s under the front hood. For most car owners, this is an acceptable trade.

Whenever we begin to rent a previously owned product, service, or skill, we rid ourselves of the foreseen inconveniences of ownership and take on the statistically less probable threat that the corporations we are renting our products, services, and skills from will fail us — and we’ll be left in the dark. Our devices decrease a multitude of daily trials, toils, and labors in exchange for quantitative increase in possible, unforeseen evils — that is, the failure of our devices, which we are unable to fix, or the future decisions of their owners, which we are unable to predict.

We are becoming a generation of human beings who tackle fewer foreseen evils and fret over more unforeseen, disastrous possibilities than any previous generation.

The typical explanations of modern anxiety are unified by the explanation of rent. Yes, we are anxious because of social media, but not simply because it presents us with horrible news stories and constant comparison. To use social media is to exchange the owned skill of communication for a rented product, relying on a myriad of developers, designers, and, increasingly, their memes and emoticons in order to hear and be heard. We exchange a whole host of foreseen evils associated with letter writing and face-to-face communication for a host of unforeseen evils, like hacking and breakdown — future evils that we hope Mark Zuckerberg can resist, because to us, they are as irresistible as they are unknown.

Yes, we are anxious, thanks to “economic insecurity,” but not because we are poor. We are poor with rented apartments, smartphones, Facebook pages, and Netflix accounts; poor in an age that “gets by” by paying more and more rent for previously owned skills and goods; poor in an age in which poverty rarely attains the dignity of thrift and self-reliance, but must scrounge up the cash for an internet connection and more cellphone minutes. This poverty is characterized by anxiety because it is characterized by an extreme dependence on earthly powers.

In “America’s New ‘Anxiety’ Disorder,” Abebe argues that we are anxious because our current political scene has revealed that “the life of the nation may not take place in a realm of issues and policy and consensus ​building, but someplace more disordered, irrational, and human.” But this is hardly a new insight for the American political participant. The difference is that, in an age of rent, we are more dependent on fewer and fewer decision-makers to make the right choices. When our daily life depends on the provision of large-scale services like electricity, data, and a connection to the cloud; when a business in Ohio needs the wealthy of Silicon Valley to remain prudent, wise, and successful in order to exist; when wealth is concentrated into the hands of a few owners on whom we all depend for our well-being, then our evils become unforeseen evils and we become anxious.

This is why all tech optimism, insofar as it promotes an exchange of ownership for rent, is wrong. There will be no happy future. There will be a worried, anxious population nervously checking their phones, suppressing a fear of looming disaster, their lives held in the hands of corporate monopolies that will, eventually, screw up. The current obsession with apocalyptic thinking in art, politics, and even business is no accident — it is simply what a certain accumulated threat level of disaster feels like to the human psyche.

Tech pessimism is often critiqued for being romantic — for inventing an idyllic past before the supposedly “dehumanizing” influence of smart technology. But a modest call to throw away our smartphones and pick up dumber technologies doesn’t promise an end to foreseen evils. If anything, it promises a grand increase of foreseen evils sparked by a increase of problems and solutions placed firmly in our hands — like maps, compasses, woodstoves, and pencils that need sharpening. A future without fear is an idle dream, but we can choose the kind of fear we will suffer. The wager of tech pessimism is that it is a far finer thing to fear the evils presented to us by goods, skills, and ventures that really are our own—finer than to fear the unforeseeable actions of the wealthy from whom we rent.